Jones was recognized for his “leadership, untiring efforts, dedication and donations given to the association for the betterment of the professional auctioneer and the auction industry.” Mr. Jones is a Past President, Life Member and 1995 Texas State Champion Auctioneer. He was elected into the Texas Auctioneers Association Hall of Fame in 2005.

Posted by: MJ Comments Off on VNA’s Inaugural “Wheels for Meals and More” …

On Sunday, March 25th, hundreds of patrons gathered in Dallas to help senior citizens in need. The event was the VNAâ€™s (Visiting Nurses Association) inaugural event, â€œWheels for Meals and Moreâ€.

Co-chaired by Dallas philanthropistâ€™ Marianne and Roger Staubach, the event was presented by Bank of America. The evening which included a social hour and dinner, was highlighted by the Live Auction which included a â€œFund-A-Causeâ€ which raised over $100,000 to fund â€œMeals On Wheelsâ€ service for hungry seniors in Dallas County.

The gala had a NASCAR theme and was held in the Park Place Porsche Dealership garage. The Texas Instruments DLP Number 96 NASCAR which is owned by Hall of Fame Racing, a joint venture between former Dallas Cowboy Quarterbacks and NFL Super Bowl Hall of Famers, Staubach and Troy Aikman was on hand for the event.When it was time for the Live Auction to begin, Professional Auctioneer and President of United Country Auction Services announced â€œLadies and Gentlemen, Start Your Bidding!â€ at which time the Number 96 Chevrolet was cranked up and the crowd jumped to attention.

Highlights of the auction included an autographed Talladega 2006 Nextel-Sprint Race Day Autographed Helmet for $5500, Infineon Raceway NASCAR Package in Sonoma for $6500, Cartier Ladies Watch, bought by Staubach for $6000, Texas Motor Speedway Package complete with helicopter arrival, $5000 and a Meal-A-Month for a year at Dallasâ€™ finest restaurants brought in $5,000.

Robert P. Carpenter, President and Chief Executive Officer said that â€œDue to the support of Mike Jones, his team and United Country Auction Services, the VNAâ€™s inaugural event, Wheels for Meals and Moreâ€¦exceeded our expectations and we are deeply grateful to you for enabling us to be the communityâ€™s provider for 3,200 men and women who count on VNA volunteers to help them maintain their health and independence.â€

Posted by: MJ Comments Off on Auction Nets $100K for Steak & Poker with Troy, Daryl & Emmitt

They may not be playing on the field at Texas Stadium anymore, but former Dallas Cowboys and NFL Super Bowl MVP Troy Aikman and Emmitt Smith and Fullback turned Fox broadcaster Daryl “Moose” Johnston can still command royalty status in Dallas and it was never more apparent than on Saturday night, September 29th as dinner for 15 with the Cowboy greats at Del Frisco Double Eagle Steak House followed by an evening of No Limit Texas Hold-em fetched a whopping $100,000 at the 34th Annual Dallas Cattle Baron’s Ball held at the famed Southfork Ranch in Parker, Texas just north of Dallas.

This year’s event was headlined by the 2007 Country Music Association Entertainer of the Year Brad Paisley and supported by the loud and raucous sounds of part country duo-part circus act Big & Rich which features Dallas area native Country Rapper-Cowboy Troy. Country heart throb Paisley donated an on-stage serenade to the Live Auction that raised an additional $12,000 to the evenings cause.

This year’s event Chairman, Dallas attorney Gina Betts remarked, “This was our biggest and best year ever with the Live and Silent Auctions grossing over $2.1 million.” Adding,“Mike Jones our Auctioneer and his entire team were amazing as always!” All in all, the event grossed over $5.5 million. The event is the world’s largest fundraiser for the American Cancer Society with over $31 million being distributed to cancer research projects in Dallas County alone.

On December 3, 2007 the November Graduating Class of the Texas Auction Academy donated $6000 to Scottish Rite Children’s Hospital in Dallas to honor fallen Auctioneer and former auction school instructor Rocky Strickland, CAI, BAS. The auction was comprised of items donated by the students, the hospital and from the school. Mr. Strickland, who at the time of his passing was Texas Auctioneers Association 2nd Vice President, was very dedicated and passionate about supporting Scottish Rite Children’s Hospital and in teaching future auctioneers. Because of his commitment and love for others, the Texas Auction Academy which conducts four charitable auctions per year with their students plans to dedicate specific funds from future auctions in his name.

Back in 2002 an auction of a few items to benefit St. Jude Children’s Research Hospital at a party held in a North Dallas backyard brought in about $7000. Fast forward to late 2007 and the little party has become a major fundraising event for the Memphis based hospital which now includes a celebrity golf tournament, big name entertainment and an auction that has become the focal point of the party. The weeklong festivities were highlighted by the annual St. Jude “Evening Under The Stars” party held October 25th at the Ritz-Carlton Hotel resulting in total proceeds topping $917,000.

“It was the best we’ve ever had” said Joe Haggar, patriarch of the Haggar Clothing Company who has been involved since the start and helped organize the first event. Haggar, a member of the original St. Jude Hospital board which entertainer Danny Thomas helped form, is still a member today. Whatever I can do to help these kids is what we are all about and I receive far more from it than I what I give”, Adding, “We are so fortunate to have good people like Charlie Daniels, Event Chairman Michael Gruber, golf Chairman Derek Harper and Auctioneer Mike Jones helping us to make this such a huge success.

This year’s featured entertainment was Country Music and Southern Rock Star Charlie Daniels who flew in from Nashville to perform at Mr. Haggar’s request. Daniels, on a tight time line, performed and immediately headed back to Love Field for a private plane ride back to Nashville to record a new album the next morning. Backstage, Haggar thanked Daniels for traveling to Dallas, Daniels was quick to respond said “you don’t need to thank me, I should be thanking you for getting me involved with St. Jude.” Daniels, the newest member of the Grand Ole Opry and best known for his country hits like The Devil Went Down To Georgia, The South’s Gonna Do It Again and Uneasy Rider also serves on the St. Jude Children’s Research Hospital Professional Advisory Board.

Professional Auctioneer and Dallas area resident Mike Jones, President of United Country Auction Services and his team returned again to conduct the Live Auction. There is no way I would miss this one Jones said. Anytime Mr. Haggar calls you to do something, you don’t turn him down, he is one of my favorite people” he added. This year’s Live Auction highlights included a golf outing described as Golf Heaven for Eight via Private Jet to Kohler, Wisconsin brought in $60,000, Dancing With The Stars California trip $19,000, Private Party for 100 with 22 piece orchestra at the Dallas Arboretum $14,500, Dallas Cowboys vs. Washington Redskins trip fetched $9,000, Black South Seas Pearl Earrings $9000, Samsung 500 NASCAR Racing Package from Roger Staubach and Hall of Fame Racing $8500, Palm Springs Golf Outing $8500, Crested Butte Ski Accommodations for 20 $7500, Meet Dirk Nowitski Package $5500 and a Football signed by Hall of Fame Quarterbacks signed by Staubach, Montana and Archie and Peyton Manning fetched $5500. All told, the evening festivities brought in over $317,000.

The St. Jude staff and volunteers are already gearing up for another great event in 2008.

As a pastor, Joel Osteen reaches one of the largest audiences in the United States and around world with more than 42,000 attending the Lakewood Church each week in Houston and millions more tune in by television to hear his words of inspiration and wisdom that teach finding a closer connection with God by learning to apply the principles of Scriptures to their everyday lives.

The Dallas Mavericks found the Ritz-Carlton Hotel to be the perfect place to be on March 21st as the NBA team celebrated by supporting the community at the 4th Annual Dallas Mavericks Foundation Tux & Tennies Gala, presented by Stanford Private Wealth Management. The event was a huge success with over Five Hundred Thousand Dollars being raised for the foundation.

The event was emceed by Dallas Mavericks guard Jason “The Jet Is On the Runway” Terry who showed that there is a network job waiting for him when his career has ended. He was assisted at the microphone by team President and CEO Turdema Ussery. All of the Dallas Mavericks players were in attendance. Also in attendance was Todd Wagner, former Broadcast.com partner of Mark Cuban and head honcho of 2929 Entertainment. Todd is also a philanthropist in his own right through The Todd Wagner Foundation. Also in attendance were former Dallas Mavs Eric Strickland, Rolando Blackman and Popeye Jones.

The Live Auction was the highlight of the night with Professional Auctioneer and President of United Country Auction Services officiating over the hilarious and spirited bidding. Auctioneer Jones, mixed it up with Terry and at times would prompt “The Jet” to encourage his fellow NBA players to “bid it up” to help those who needed help the most. Between the two of them, they were able to bring in over $200,000 with just four items. These were certainly not average items though and the bidding was spirited. One of the most beautiful items ever offered in a fundraising event was a one of a kind full size Swarovski Crystal Basketball autographed by league MVP Dirk Nowitzki which sold for $64,000, an evening with Jerry and Ramira Stackhouse at Dean Fearing’s new restaurant Fearings followed by a night at the Dallas Ritz-Carlton sold for $27,000, a rare collector bottle of Hennessey cognac brought in a whopping $20,000 but the highlight of the Live Auction was an MVP basketball clinic with 2007 NBA MVP Dirk Nowitzki, Jason Kidd and assistant coach Joe Prunty which fetched an evening high $100,000. 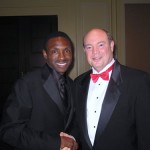 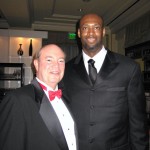 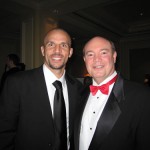 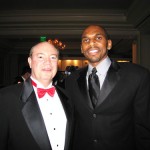 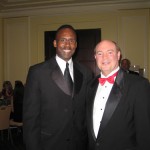